I want to isolate parameters such as Tortuosity, Curvature, Torsion, Length, Radius etc. for the centerlines. The current vmtk version groups these centerlines based on Centerline Ids, Group Ids etc.

But it still calculates all the metrics for the centerlines based on CenterlineIds and not based on GroupIds as it should have for parent and daughter branches in the vasculature.

Should I use the Blanking arrays to separate the values along the centerline curves? In that case I would lose out on the centerline metrics for the blanked regions of the arteries.

The other option is to use the Centerline tree which contains the merged network of centerlines near the bifurcations. However this is just an approximation and is not the true representation of the centerlines.

Could you @lassoan suggest a better way to isolate centerline data without using the merged version?

I’m not that familiar with the VMTK metric computation classes. It may be easy to change them or add some more options about how to group centerlines. You can send a pull request if you have any specific suggestion.

While using VMTK filters for computing metrics can be convenient, it may be similarly easy to get all point and cell attributes as numpy arrays, filter them using numpy indexing and compute statistics on them using standard numpy functions.

The other option is to use the Centerline tree which contains the merged network of centerlines near the bifurcations. However this is just an approximation and is not the true representation of the centerlines.

I have a few ideas in mind for this. I will send out some pull requests along with some previous other requests related to obtaining more metrics from the centerline data that I had raised earlier.

Here is what I meant to say previously

I’m not sure if that is exactly what you are after or not, but “Centerline properties” table that Extract centerline module creates contains radius, length, curvature, torsion, tortuosity values for each branch.

I would also add that in recent Slicer Preview Releases, curves can store any number of point data associated with control points of the curve. Currently, we only store radius value there, but we could add all other metrics as well. You can get these measurements as numpy arrays and compute statistics like this (get average and 15th percentil of the radius of branch Centerline curve (0)):

Yes, I am aware of this table which provides detailed quantification of different metrics. However it is based on the input obtained from the merged centerlines which does this to the original centerlines extracted using vtkvmtkPolyDataCenterlines.

This file has been truncated. show original

I want to obtain these same metrics based on this:

I haven’t noticed the difference between the bifurcations shape introduced by vtkvmtkMergeCenterlines but I see it now:

Slicer can search for a path in the non-merged centerline tree, which could be used instead of vtkvmtkMergeCenterlines: 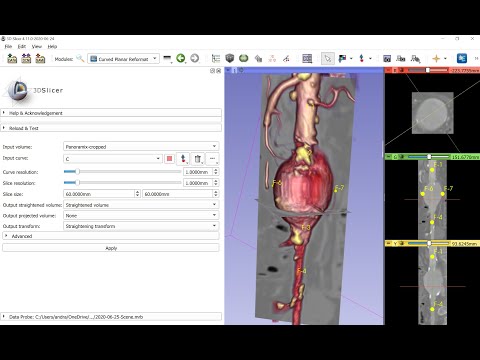 Currently, we just get the point coordinates and not copy point data from the centerline model into curve node, but it would not be hard to implement this.

If you are interested in computing the curvature, it is one of the built-in measurements of curve nodes. I’ve tested this curvature measurement on the non-merged centerline curve and got very noisy results:

Most probably it is due to noisy centerline (points are not along a smooth curve, probably distance between points varies, too). If I fit a spline to the curve (by resampling the curve using 50 control points and then setting curve type to spline) then curvature measurement becomes correct:

Most likely in the noisy measurements you have the same issue, i.e., the centerline is not smoothed and resampled at equal distances.

Thank you @lassoan for the piece of code. Yes I will send out a pull request with the proposed changes soon. Moreover, I also wanted to know if scalar values of ‘GroupIDsarray’, ‘TortuosityArray’ , ‘BlankingArray’ etc. can be incorporated in the centerline model. I generated the following plots by using the conventional vmtkscripts, but it does not always work correctly. [image] [image] Currently there are only 3 ways to postprocess the centerline data as shown here. [image] However, …

I used the earlier method you mentioned in the video to coincide the merged centerlines (curves/splines) on the vtkpolydata surface representation of the centerline model but got this.