I am just wondering if it is possible to use a 3D slicer software with an iPad (M1 processor). It would be great to take advantage of the stylus.

It would be great to hear advices and comments.

Nothing would be native on an iPad, but there could be a potential of using Sidecar on mac to use an iPad as a second display.

Microsoft Surface Pro tablet with its stylus is known to work well and it runs regular Windows. Here’s a video of a Microsoft Studio which is just a really large touch screen desktop running Slicer. 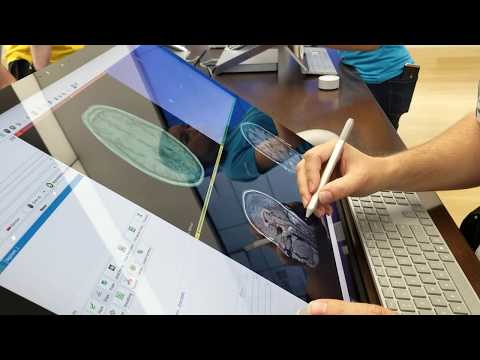 If anyone is wondering how 3D Slicer runs on a Surface Studio… It is just awesome! I had a chance to try it in a Microsoft Store (it helped that Slicer installation does not require administrator access anymore). Thanks to recent improvements by @Sunderlandkyl, drawing with the surface pen is very smooth. The programmable wheel controller is very handy, too (I just added a prev/next slice action but any other shortcuts can be added). A short video is available here:

Thanks for your quick reply James. I will consider this.

You can also use Slicer on an iPad by running Slicer on macOS/Windows/Linux computer and connect to that from the tablet using a remote desktop app.

I also use PMOD software and have used sidecar in order to take advantage of the apple pencil. It works really well once you get it setup and is much better than something like a Wacom Tablet. I think it will work just as well with 3D slicer.

I wanted to connect ipad to windows PC with " Anydesk" but it did not word.
Segmentation with ipen would be pretty easy instead of long hours on the mouse.

Anydesk may not support the Apple Pencil on Windows. Probably Apple Pencil works if you use the iPad as a sidecar for a Mac. Or you can buy a Windows PC, which has very good built-in pen support (such as most Surface laptops/tablets, Surface Studio, etc.).