How do I add robot arm STL into a scene?

I’ve just created a scene for a phantom spine I’m working with seen below.

I have the stl files for the abb irb 120 robotic arm, but when I drag & drop an arm link.stl file into the 3D Slicer space, it doesn’t load or show up in the 3D viewer, but shows up in the Models tab. How do I fix this issue and import each arm link stl file into 3D slicer such that they are joined together in order?

Maybe they are placed too far away or use different coordinate systems so you don’t see both? You can try to center the 3D scene using the Center the 3D view on the scene-button.

Also make sure the STL uses mm as coordinate system units (or scale it using a transforms module).

Note that you can also animate the robot (simulate rotation around each joint) if you load each section of the robot as a separate model, with the rotation joint in the origin. You just need to create a hierarchy of transforms in Transforms module and add each model at the appropriate level in the transform tree. 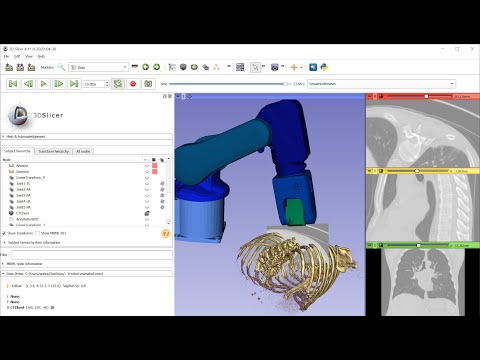 I’ve done what you recommended and it works. Also thank you for the upload of the irb120.mrml file. I do however want to try it out for myself to develop a better understanding of the transforms, how to set up my robotic arm and how to fix any issues that I encounter.

The model of each link of the IRB 120 robotic arm has imported into 3D slicer, but the joints are not connected. Is there a tutorial or guide that illustrates how to get these joints connected and how to have the transforms set up properly in a hierachy of transforms for each joint?